You hold the power of starting something new in your life, career or business: anytime is the perfect time for a fresh start.

She was the star of the stage – WOW! She was magnificent!
“I initially met Frederique during the group-work we did on the first day of Bernadette Doyle’s ‘More Leads, More Clients’ More Sales’ conference, and was impressed by her amazing aura of ‘aliveness’. Then two days later, she was the star of the stage – WOW! She was magnificent! Having presented at many events previously, in my former life as a Midwifery Leader, I was blown away at her ability to speak from the heart, with no written script/powerpoint, as she engaged the audience with her awesome ability to awaken and inspire in us the belief we CAN move our mindset if we choose to. Her knowledge and humour gave me another boost to continue to look at what thought patterns I may be allowing to limit my greatness. Thank you Frederique – the world is definitely blessed to have you shining amongst us.”

Join our Mountain Movers, who receive M3 shifts, strategies, insights and tips to help you boost your life, career or business (or all 3!). We’ll also send you The Top 3 Mistakes Leaders Make When Driving Change (and How to Avoid Them!) report. 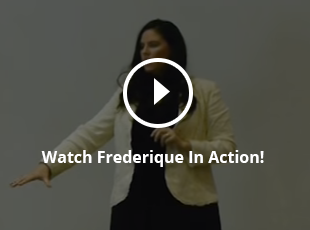 Discover what leaders and organisations have to say about working with Frederique (in 1 sentence)!

From beginning to end, I was gaining the knowledge she was sharing with us. Joanna Skóra

The feedback we received from the members who attended her keynote was terrific, and I, among many, left the room equipped to make positive changes in my life. Ronan Neacy

Frederique’s unique presenting style, which I would I describe as passionate, energetic, fun and motivational, really adds to the powerful material she presents. Damien McLaren

Frederique lives her truth and is a vibrant presenter who has great passion, energy and positivity that is conducive to creating real change.” Mary Devine

I have to say, that it was the most enjoyable, motivational, and indeed educational experience I have had for some time. The woman rocks, simple as that! Peter Simpson

Your talk opened up a door that was stuck – it triggered something… You gave me great inspiration, thank you. Una Williams

Frederique has a great natural speaking ability, with a dreamy French accent all rolled in to her Irish accent. I could listen to her all day. Siobhan Boucher

As well as using practical examples, Frederique demonstrated how we can implement her teaching in our personal and business lives. I've learned so much from her. Petia Jordan

What impressed me most about Frederique was her positive attitude which makes you see everything from a different perspective when everything in your life is falling apart. Dominika Miernik

I had the privilege of hearing Frederique give one of her M3 talks yesterday. It was an inspiring hour, but above all it was practical! Carolyn Blunt

Frederique, you have wonderful energy and enthusiasm for life, and when you present you offer all of that and more. Gene Early

By day 3 of the event, I was utterly exhausted and finding it hard to fully believe that everything was possible. Then Frederique came on stage, and it was like having sunshine pouring off the... Judith Townshend

She was the star of the stage – WOW! She was magnificent! Thank you Frederique – the world is definitely blessed to have you shining amongst us. Sandra Louise Walsh

Frederique is an inspiring speaker who knows her stuff. She gets her audience engaged and delivers high-quality work. Junior Chamber International Dublin

Frederique is someone you can completely entrust both your personal and business goals with. I loved every part of the programme. Gertrude Lawler

By changing your mindset to believe in yourself and your abilities, you can quite simply take on the world!!! Karen Leech

Frederique offers not only a terrific energy that clearly conveys enthusiasm, but also on target insights that allow the audience to put into action her suggestions. Michele Rosenthal

Frederique is like a whirlwind...blowing away cobwebs and creating space for bigger and greater. She has the unique ability to inspire you to expand your mindset. Ntathu Allen

I flew into Ireland for the event and the value I received from attending the event was amazing: I am totally focused and inspired now to achieve my goals. Anne Perez

Frederique truly is an expert in her industry, and I recommend her as an outstanding speaker for your event. Silvia Pencak

Frederique is the best at what she does; getting to the core of your limiting beliefs and helping you to stand in a more powerful place. Michele Welch

All the work we did together left me with clear plans and strategies that I can use time and time again. Amy Brann

She brings passion and enthusiasm; she is an engaging presenter, ensuring the attendees receive quality, informative and interactive content. Elaine Rogers

Frederique is exceptional. There are few people who can keep up with the level of performance. Kate Cobb

It's powerful having someone on your side, pushing you to be the best you. I really do feel blessed to be working with someone who is so gifted. Gertrude Lawler

Frederique is an inspiration, an expert in her field and a lovely person who is passionate about helping people to realise their potential. Sue Cartwright

Frederique’s talk was a unique and unforgettable experience. Her style was very captivating and she put her message across clearly and emphatically. Justine McGrath

She knows how to provide the BEST support and instils her own passion, inspiring you to not only do a good job, but become the best at what you do. Breda Stackpool

Frederique really does deliver on her promise of high quality content that will have you heading in the direction you need to be heading. Mairéad Kelly

Despite technical glitches, Frederique engaged my audience, inspired them, and strengthened the objective of the conference. Amy A. Palmer

Frederique is a real inspirational expert in her field, you will learn so much on both a business and personal level. Tracey Wall

The fact that I now feel confident about taking the entrepreneurial leap is invaluable for me. I no longer fear the venture but instead I make things happen. Zoe Nowak

Frederique is a committed, creative hardworking and compassionate coach whose upbeat positivity directly impacts anyone that chooses to engage with her. Brian Colbert

Do not be fooled by the fabulous smile – this is serious work with seriously good results! I feel reinvigorated and have absolute clarity in my plans. Poll Moussoulides

My sales have grown, productivity has increased and I am feeling happier about the progress I am making on all fronts. Rob Marr

Frederique makes me believe that it's actually possible. I have confidence that I am capable of taking charge of my own life! Lauren Methena

Within 20 minutes we had a clear plan on how to solve a specific business problem I have been struggling with for months. Linda Spaanbroek

Frederique is intelligent, skilled and highly motivated. She is inspiring to know and has a great ability to positively enhance the lives of those she works with. Owen Fitzpatrick

I had so many breakthroughs. I’ve been to so many courses before and breakthroughs just didn’t happen. This time, it was just absolutely amazing. Fiona Walsh

Frederique brings a true passion, conviction and total integrity to her work. It's been transformative both for myself and my business. Sean O'Sullivan

I discovered it doesn’t matter what your goal is. Frederique can get you there. I found it really incredible. Paddy Lavelle

Frederique has helped me hugely to see a much bigger picture than I ever imagined before I came. I owe her a great deal: Frederique is quite exceptional. Rita Marshall

It’s useful to be reminded that anything is possible, and that the way to create the life of my dreams is to keep going, believing, taking action and being me. Bennie Naudé

I’ve been in business for over 12 years and this event has completely changed the way I want to run my business and just even run my life. Siobhán Guthrie

Frederique has a magic quality. When you’re in her presence she just helps you to think bigger – so much bigger that you dare dream possible. Bernadette Doyle

Send this to a friend